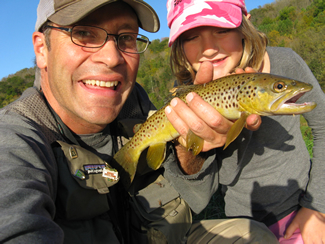 I started professionally guiding in 1990 when I was 19-years-old for The-In-Fisherman's Camp Fish in northern Minnesota. It was my first job out of high school.

Bozeman-based outdoor sporting photographer Dale Spartas and Midwest Fly Fishing Magazine's editor Tom Helgeson were instrumental in getting me connected to Montana and Idaho. I am forever indebted to these individuals.

Trout was my fancy and I moved to Montana to fly fish for trout and go to college (in that order) in 1991, which all started at Dan Bailey's fly shop in Livingston, Montana. That summer, Bailey's was instrumental in providing gear and consulting to the 'A River Runs Through It' project. At the time I had no idea of the book they were portraying, and the timing of all this was stunning.

I worked as a fly rod design apprentice with Tom Morgan within these years. I worked with graphite and tinkered with bamboo. Tom put Winston Rod Company on the map and is considered to be the best rod designer by his peers.

In my early 30's, I was also into tournament fly casting, rod design and guiding at the same time. In 1997, I finally attained second place with 241 foot two-handed cast at an American Casting Association's national tournament. I currently combine these experiences together to teach others what I've learned. It is a continuous present for me to give to others in the sport of fly fishing.

I hosted a series of fly fishing tips videos during a sports segment on NBC-TV affiliate in Bozeman, Montana. I also worked as a Shipping Manager at Powell Fly Rods, Sacramento, California.

Somehow, in the middle of all this, I took a B.A. in Journalism at the University of Montana, 1996.

When I'm guiding and teaching, I don't exaggerate and I back up what I say. The one thing I learned over the years is that if you want to get good at fly fishing, having a sense of humility and humbleness actually accelerates the learning curve; the walls come down and it triggers something in your brain, and it becomes easier.

Outfitters & Companies I have guided for:

I'm also a "Fly Shop Junkie" and have worked in a bunch of 'em: